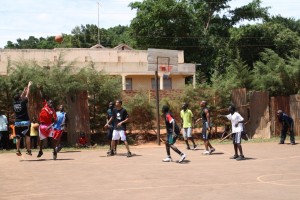 In March 2012, the Big Bangs undertook their first Tour of Uganda.

Our hosts were the Ottawa-based Friends of the Ugandan Child (FOUC), which since 2007 has been working in partnership with the local community-based organization Care for Your Life (CFYL) in the village of Kamengo.

FOUC and CFYL programs are dedicated to supporting emerging young leaders, promoting academic achievement and innovation, raising awareness about HIV, and promoting collaboration between different sectors of the community including community-based organizations, educational institutions, local authorities and faith-based organizations. Key objectives include strengthening the capacity of community members and orphans and vulnerable children to better manage the daily challenges they face and to increase the number of orphans and vulnerable children in Kamengo who receive educational and psychosocial support through the Kamengo Education Fund.

CFYL is essentailly a school/home for kids in Kamengo, a small village in the Mpigi district, Uganda.  Access is by vehicle along partially paved roads some 2 hours outside Kampala.  Over 150 children form the CFYL community, all of whom receive educational scholarships.  In addition, 5,000 people access the water pumps on site and 80 youth use the computer center and library.  Medical missions at CFYL incolve 3,500 patients per mission.

As part of our Tour, the Big Bang Ballers provided 2 sets of basketball uniforms, 200 t-shirts, almost 30 pairs of shoes and several basketballs to the male and female basketball teams of the CFYL community, as well as financial aid for both the teams and the CFYL centre itself.

Rodrigue and Pierre spent a week training the boys and girls teams, developing not only the basketball skills of the kids, but also emphasizing teamwork, valuing the skills and talents of team-mates, developing leadership skills as well as becoming more aware of the responsibility one has to the “team”.

At the conclusion of the week, Rod and Pierre helped the teams hold both a men’s and women’s tournament, attended by teams from the local area as well as Kampala.